Local insurance industry on the rebound

Despite government jobs figures that show several years of declines in employment and the number of insurance companies here on the North Shore, the industry appears to be on the rebound.

Two relatively new and separate insurance concerns, the employee benefits practice of Insight Performance, and Townsend Insurance Group, are making a go of it.

Ward helps oversee Insight’s relatively new insurance agency, which is run by Salem resident Darren Ambler, the managing director of employee benefits. The company is in the process of its second move in less than four years.

On Monday, Insight was scheduled to move from Danvers to a new office at 152 Conant St. in Beverly.

The insurance brokerage is focused on providing health and other benefits to small to midsized businesses. Ward says the brokerage has seven employees. Insight as a whole has 30 employees, and has seen a 400 percent growth rate since 2010, Ward said. The idea is that Insight can offer both human resources and employee benefits at the same time.

Also making a push into the insurance industry are James Townsend and his family. Townsend is chairman of Townsend Insurance Group of Beverly. This 2-year-old company is located in a new commercial building at Prides Crossing, 586 Hale St. Townsend’s son, CJ, serves as the new insurance company’s president. The company is focused on the sale of insurance for homes and businesses.

Jim Townsend said insurance is “an extension and natural diversification” of the Danvers-based Townsend Energy, of which he is CEO. It’s all part of an expansion of a fourth-generation family business with deep roots on the North Shore, and which also includes Jim Townsend’s brother, Mark, who is president of Townsend Energy.

“It’s a different product and service,” said Jim Townsend of the insurance business from the energy business, “but it’s still a customer business.”

Government workforce data suggests the North Shore insurance industry may be on the rebound after the downturn.

However, there are 29 fewer insurance establishments on the North Shore than there were 10 years ago, according to data provided by the Salem-based North Shore Workforce Investment Board for the 19 cities and towns it serves.

This data may underestimate insurance activity on the North Shore because some companies may add insurance as a service but may not report it to the state.

“Companies self-select the industry they belong to based on 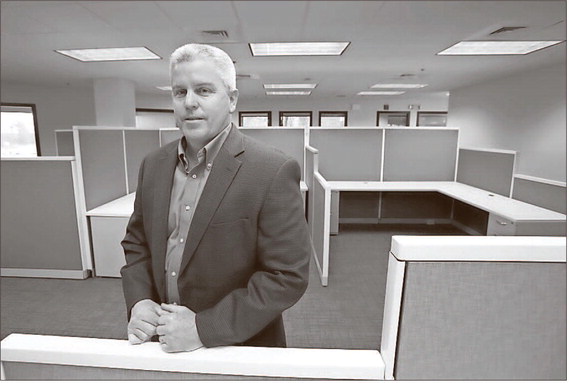 . Continued from Page 7 the industry in which they generate the largest percentage of their profits,” said Will Sinatra, the North Shore WIB’s manager of market research, Overall, the number of insurance establishments on the North Shore has dropped from 196 in 2006 to 167 in 2015. This represents a 17.4 percent decrease.

The average monthly employment in the North Shore insurance industry was nearly 1,950 employees in 2015.

However, if you stayed employed in the insurance industry here, you were rewarded. Data shows the average weekly wage in 2015 was $1,626, an increase of 27.4 percent in 10 years.

“Companies are starting to come back in the last year we are looking at,” Sinatra said. “They have not come back as fast.”

Danvers resident John Archer, the owner of Archer Insurance on Cabot Street in Beverly, said local insurance companies like his face competition from “direct writers” like Geico and Progressive that each spend hundreds of millions on advertising each year. Archer said his company sells the same products as these big insurance companies, so consumers really don’t save money with them.

Archer, whose company has 13 full-time employees, said the other big difference is these companies lack the personal connection a small insurance company has. They are also not supporting causes such as the River House shelter in Beverly or local youth sports teams.

“Geico has the gecko and Archer Insurance has John Archer,” Archer said.

“I don’t think it ever went away,” said Insight’s Ward, about the industry on the North Shore.

After all, people and businesses have always needed insurance. However, Ward has noticed the industry has consolidated.

“The last 10 years, and it’s going on now, you are seeing a big shift in the industry,” Ward said.

Much of the consolidation has to do with owners who are in their 60s who are looking at succession planning and who may be looking to sell their businesses. The reduced number of companies on the North Shore also has to do with acquisitions. The complexity of health care has also taken its toll on some agencies.

However, Ward said the insurance business has been steady.

The former Salem State University baseball coach, Ward, of Danvers, formerly owned Harbour Benefits of Salem in the early 2000s before selling the business to Eastern Bank in 2004.

In 2010, Ward became a partner at Insight Performance.

In 2013, Ambler joined with Ward. Ambler is a former senior vice president at Eastern Benefits Group. Amber is heading up the insurance agency locally. The brokerage launched in July 2013, first starting in Salem and then moving to Danvers, and now it’s up to seven employees. It works with startups to companies with as many as 1,000 employees all over New England, Ward said.

Townsend Energy is a family-owned company that provides heating oil, propane, energy-efficient heating and cooling equipment and repair services dating back to 1931.

Its companies have 125 employees in both the energy and insurance businesses.

Jim Townsend has a 15-year connection to the insurance industry due to another growing company in the energy insurance space, Energi Insurance Services of Peabody.

Energi provides “specialized insurance and risk management solutions” to companies in the energy industry. It’s an industrial reinsurance company that traces its roots back to 2002 when some leading energy companies got together to develop better insurance solutions for them.

Townsend was one of the first companies to be insured by Energi, Jim Townsend said.

Today, Jim Townsend serves as chairman of Energi. After college, his son worked in the insurance industry for three years before joining Townsend Insurance Group.

Townsend said the new insurance company wants to deliver the same kind of personal and professional service it provides to its energy customers 365 days a year.

Click here to see this page in the eEdition: